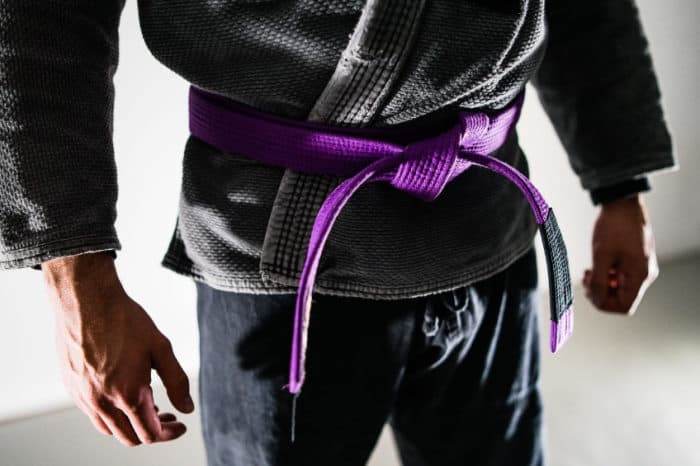 The order of Gracie BJJ Belts is broken down into 5 colors white, blue, purple, brown, and black with 10 levels (Dans).

Each belt represents a greater degree of mastery over the art than the previous one. The order of Brazilian Jiu-Jitsu belts is a system for ranking practitioners by skill level.

Depending on the school and instructor, different colored belts or even stripes on the belt itself may represent this.

The Levels in the Gracie ranking system for Brazilian Jiu-Jitsu are as follows:

How the Brazilian Jiu-Jitsu belt system was introduced

The Jiu Jitsu Belts System is an acknowledgment of the student’s progress in art. As a student progresses through each level, they will learn more advanced techniques and strategies for dealing with different types of opponents.

The belt system in Brazilian Jiu-Jitsu is a way of measuring progress and skill level. It’s also a way to set goals for students, as well as give them something to work towards.

Helio Gracie, who wanted to create a ranking system that would motivate students and allow them to measure their progress in art, created the belt system for Brazilian Jiu-Jitsu.

It’s also a way of teaching responsibility and discipline. We expect the higher belts to mentor lower belts, so they must have a better understanding of the art.

BJJ belts and what it takes to get each belt

The rank of each belt in BJJ or any other fighting style is determined by knowledge, skill, and ability to apply that knowledge in sparring and live training situations.

In Brazilian Jiu-Jitsu, there are a total of nine belts that a practitioner can achieve. The order of the belts is as follows: white, blue, purple, brown, and black.

At each level, there are four stripes that can be earned before advancing to the next belt. The first stripe is given after a student demonstrates a basic understanding of the techniques taught at that level.

The second stripe is given after the student shows improvement in their techniques.

The third stripe is given after the student demonstrates proficiency in all of the techniques learned at that level.

The fourth and final stripe is given after the student demonstrates mastery of all of the techniques learned at that level.

After earning all four stripes on their current belt, the student will be eligible to test for the next belt level.

Belts are tied around the BJJ uniform which is called a GI.

The beginners get a white belt, which denotes no special rank or status. The white shows one is working toward the first belt; blue (although blue is second in numbers, white is not a rank, blue is).

How long are you a white belt in BJJ?

It’s a question that many beginners in BJJ or any martial art ask themselves and others. Many people wonder when they should move up to the next belt.

Should you be a white belt for three months? Six months? Twelve months?

You’ve probably heard many answers from different people, but here’s the actual one: A white belt is a brand-new student in BJJ.

It is the first belt color and represents the beginning of your journey in BBJ. When everything is new and exciting, it’s also known as “Beach Towel” because it’s so easy to see on the mats.

The first thing to understand is that there’s no set time limit on how long you should be a white belt. Each person progresses at their own pace, and it can take anywhere from six months to 2 years to make it through the entire process of earning your blue belt.

Having a blue belt means you have learned the basics, although you can’t execute all moves and strikes, and combos, at least you know them all and can implement at least one like a pro.

This means that you should be able to pass the guard, take the back from standing or on the ground, submit someone from mount or side control, etc.

It also indicates that you are good at ground-and-pound and know well about the turtle position and can execute it during a street fight.

The blue belt is a belt of competence. Blue belts should be able to demonstrate an understanding of the basics of BJJ.

The blue belt is where you start to see the real mastery of Jiu-Jitsu. Blue belts must know at least 2 or 3 submissions from each position.

You should also know what they’re doing in all positions (though they may not have as much experience) and have a solid understanding of open guard passes (and when not to use them).

How long until you can move to purple belt in BJJ?

The defined time of staying with a blue belt is one year, but it can take 2-3 depending on someone’s learning capabilities and execution skills.

At this point, one becomes familiar with almost everything about BJJ–moves, combos, vein chokes, joint locks, positioning, mounting, submission attempts, takedowns, etc.- but masters a few of those.

The purple belt also needs to be able to defend against other people using top positions. This means knowing how to escape from side control, knee on belly, and mount.

Finally, the purple belt should be able to use all these positions in a match-like setting with speed and power.

The purple belt’s focus is to gain more experience with the positions and learn how to transition between them well.

Normally it takes one year of hard training to jump from purple to blue, but it depends on your trainer who examines you and prescribes you the brown pill.

How tough is it to get to a purple belt?

The purple belt is the first belt that’s not a beginner belt anymore. At purple belt, you should know everything about your art: techniques, submissions, defenses against submission attempts, self-defense applications, strategy, and philosophy behind it.

In other words, it’s the mid-point to the black belt and one is going to fully implement all the theories learned during the days with white and blue belts.

One is going to execute some formulas he has seen his master doing with ease. It’s the point where people surrender due to the hard training, tough exercises, and painful sparring sessions.

Once the purple belt is achieved, the body would have gained the agility required to accommodate the upcoming levels.

A Brown belt holder in BJJ must know how to control the bottom position, how to escape from the mount, back mount, and side control.

What skills are necessary to get a brown belt in BJJ?

To achieve a brown belt in BJJ, you need to have a deep understanding of the many different skills and techniques that are required for success on the mat.

First and foremost, you must have strong physical conditioning and explosive power, so that you can respond quickly to your opponent’s movements and effectively counter their attacks.

Additionally, you need superior grappling skills, including an understanding of how to control your opponent’s range and leverage your body weight to gain leverage in even the most challenging positions.

And as with any sports discipline, practice is key: you must be willing to put in the hours on the mat, drilling new moves over and over until they become second nature.

Overall, it takes dedication, determination, and a deep passion for BJJ to reach the brown belt level. But if you have what it takes, the rewards are well worth it!

A BJJ black belt holder knows how to be a good teammate. A black belt in BJJ is someone who has the skills and knowledge to help others get better.

BJJ black belt should be an example for others to follow, not only by what he does but also by what he says.

A black belt must know how to lead, but also how to follow. And have the fighting skills, to defend against the chokes, armlocks, and other submissions that are a Jiu-Jitsu black belt’s bread and butter.

But what about those times when you get caught in one of these positions yourself? What if your opponent starts to crank your neck or wrist?

The good news is that there are plenty of ways to escape from even the most devastating BJJ submissions it takes practice, technique, skills, and nerve control, which usually a black belt holder has.

It usually takes 8 to 10 years to achieve a black belt in Brazilian Jiu-Jitsu.

Why do some black belts in BJJ have a white bar?

This combination of black and white remains till the 9th Dan. After it, there are 10 white bars on the red belt; black isn’t there anymore.

The white bar is a sign of an apprentice BJJ black belt. It is a way to indicate that they are still learning and need to gain more experience before moving up in rank.

There are a total of nine belts in Brazilian jiu-jitsu, each representing a different level of proficiency. Beginners start at the white belt and then progress through the ranks of blue, purple, brown, and black.

The final four belts are known as the degrees, and they are only awarded to those who have achieved a high level of expertise.

The journey to becoming a black belt is long and challenging, but it is ultimately Rewarding. Those who persevere through years of hard work and dedication will emerge as skilled martial artists who are ready to take on any opponent.