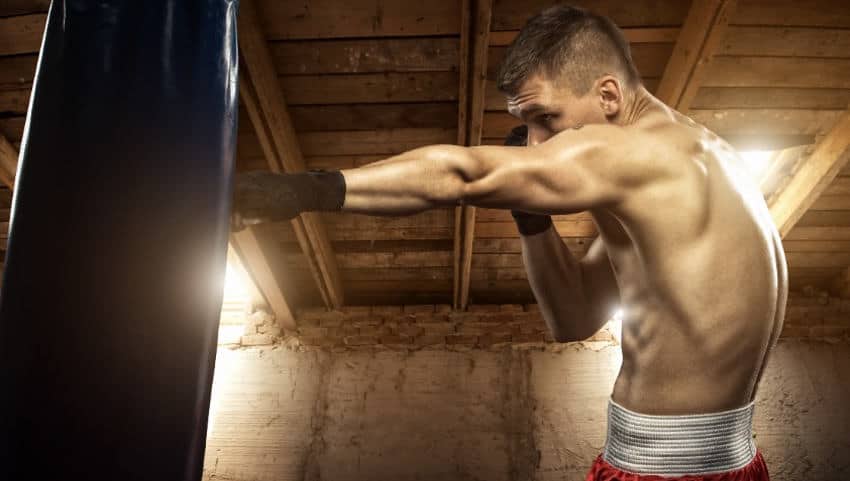 Boxing is essential to self-defense and fighting back. You need to know how to punch to be effective in a fight.

The most important thing when punching is to actually punch correctly.

Most people do not punch using the correct form. This is a good way to sprain or injure the wrist or break your fingers.

The first thing is to make a proper fist with the thumb lined up on the furthest knuckles of your other fingers. The proper fist will save you from broken fingers or a broken hand.

When you first start to punch a heavy bag or focus mitt make sure to punch light. This will help you get used to the distance and not mess up your hand or wrist.

Once your wrist gets used to the punching then you can slowly build up the power hitting the bag.

I remember when I started to hit the heavy bag with no training. I rolled my wrist all the time until I learned how to properly punch.

In boxing and other martial arts, the punches are numbered so the instructors can call out punching combinations.

This is the one everybody will learn first the old 1 – 2 combo.

You throw the jab then rear cross at your opponent. The jab is there to set up the rear cross which is your power punch.

The jab is used for distance and to set up more powerful punches. You never really see someone getting knocked out by a jab punch. The jab is not a power punch.

If you are new the jab punch is your lead hand so whatever foot is in front when in a fighting stance or boxing stance will be the lead jab.

To make things easy most people fight with their left hand forward and right hand in the rear. This combo would be a left-hand jab then a right-hand rear cross then a left-hand hook punch.

2 – is the rear cross right hand

5 – is the uppercut left hand

I like the uppercut because fighters sometimes drop their head down and the punch is devastating if you land it. Just watch a Mike Tyson fight and see the true power of an uppercut.

Most people make the mistake of loading up the uppercut by dropping the hand below the waist and then bringing it up.

The true power is in your hips and body motion. You do a kind of dip with your legs and drop down just enough to thrust up with the uppercut to the opponent’s chin.

You can throw a double jab which you see all the time in boxing and UFC fights. This double jab will set up many other punches you can do.

Throw the jab then come in with rear hand uppercut, throw another jab then finish them off with a powerful rear cross. Hopefully, that will knock them to the ground.

6 – is the right uppercut

You lead with the jab and then all-power punches. This is one that can do some damage.

6 – is the right uppercut

When we train we do several things to throw off the opponent. Here are a few you can do with your combinations to help when fighting.

Make sure you do not do the same rhythm when fighting you must mix things up. What I am talking about is the time between each punch you will want to sometimes vary it.

You will also want to vary the power of each punch. You will want some punches fast and some with all power.

Boxing and MMA training trained in both. They both teach combination punching and kicking. Hig low and low high attacking are also taught.

I may jab you twice in the face but my third punch is a rear cross I go for the stomach. The more you can mix up the high and low punches the harder it will be for the opponent to defend.

You want to keep the person you are fighting guessing what you will throw next.

We have a few combinations where we do a double jab. You can almost do that with any of the combinations. Stick in a double hook or double rear cross. This will really throw off your opponent.

The punching combos can be endless when stacked upon each other. I would not do too many combinations because whatever you have planned your opponent will move to counter.

You always need to react to what your opponent does in the fight. Working on these combinations helps with your muscle memory and reflexes.

What are the 6 basic punches in boxing?

The jab punch is one of the most important punches in fighting and in boxing. This has the longest reach which allows you to hit the opponent and set you up for a power punch. The power punches would be hook, uppercut, or rear-cross.

How do you throw a jab punch? You use the lead hand when you are standing in a fighting position. You throw the jab straight to the target rotating to hit with the two large knuckles upon impact.

The jab is used to determine distance, check out the opponent’s defense, and set you up for the power punches. If you use the jab right you will have a ton of success in a fight or when boxing.

The best place to hit the opponent is in the chin since you want to knock them out with the power punch.

You will see many boxers and fighter jab then jab again and once there is an opening they will throw a rear cross.

You can throw the hook punch with either the left or right hand. You are once again aiming for the chin or jawline.

In this punch, to generate the power you want to use your hips. You will have your hands up in a fighting position.

Once you start the hook you bring your fist from the guard position to a horizontal position while rotating your hips and the lead foot. This is the technique if you are doing a hook with the lead hand.

If you are using the rear hand you will use the same movement as you did with the leading hand but rotating the hip and foot the other way.

Power does not come from the arm it comes from the hips and rotation.

For this punch, you once again can use the left or right hand. You do not want to drop your arm and then swing it up at your opponent.

If you want to see uppercuts with power and done right check out the Mike Tyson video below. He knocked many pro boxers out with that punch.

There you have the 6 basic punches of boxing which include jab, rear cross, left hook, right hook, left uppercut, and right uppercut.

Training to do boxing

You want to dodge, weave and slip punches as you do the combinations. You need to practice your foot movement around the bag.

Everything you do when you train has to be like you are in a real fight. You will fight as you train so if you do not train hard then when you fight in the ring things will not go well for you.

What you need to train at home:

This is all you really need at home to get started with training to do boxing combinations.

I would take it slow when punching a heavy bag for the first time. You will break your hand or wrist if you do not slowly build up your hand and wrist strength to punch.

I remember when I got my first punching bag at 16 years old and I hung it up in the barn. When I first started punching my wrist would roll. I had to learn how to punch right and build up my wrist to not roll when punching.

The last time I rolled my wrist was 25 years ago because I learned how to punch correctly and I slowly built up my wrist strength.

Once I had that strength I was able to punch harder and faster because I knew I would not hurt my hand.

You should do 3-minute training rounds using one combination. The thing you want to do is move around the bag doing the combinations and you also need to envision someone throwing a punch and you slip it. This is the kind of training that will separate you from others.

After 3 minutes then take a minute break and then repeat. See how many rounds you can go before you are exhausted.

My first day back in the MMA gym we were doing combinations and I lasted maybe 1 minute of the first 3 minute round.

My endurance and conditioning were not there when I first started but 3 months later I had no problem going 6 of the 3-minute rounds.

The heavy bag will help you build up strength, power, and speed.

We hope the combinations help you as you train at home or at a gym. You can easily make up your own combinations to train with.

Make sure you train like you are really in a boxing match or MMA match. This will better prepare you when you actually get into a ring.

If you are just training to get better at punching so you can defend yourself, you still want to train like it is real.

Once you get the hang of it you may just love to box I know my wife’s mom takes boxing and she’s in her seventies.

You can also check out our free online training program that will teach the punches we mentioned and show you different combinations.