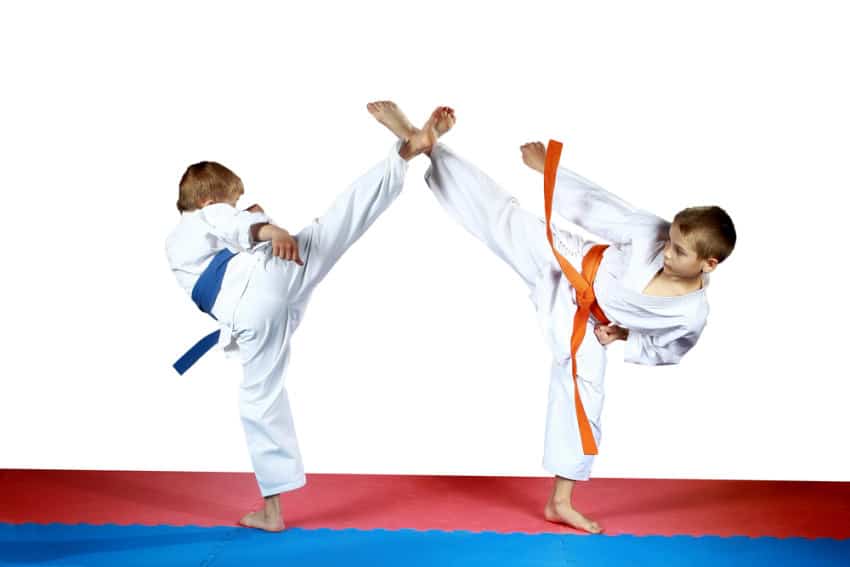 The Taekwondo belt order is typically determined by your level of skill and training. Beginning trainees typically start out with a white belt, which represents purity and inexperience.

As you progress through your training, you will move up through the belts in color and number.

Each belt has its own set of requirements and rules governing it, with each rank representing a greater degree of mastery over the sport.

Ultimately, your goal in Taekwondo is to achieve a black belt and become a master of this dynamic martial art.

What is the Taekwondo belt order for all the different governing systems?

ITF vs WTF vs ATA

There are different colors of belts that you can earn in Taekwondo. Each belt represents a different level of skill, and they are worn in order from least advanced to most advanced.

Here are the different belts for ITF, WTF, and ATA.

To achieve a 1st-degree black belt in martial arts is to reach a pinnacle of physical and mental strength.

This prestigious designation symbolizes the dawn of a new day when one has overcome the darkness of their past struggles and embarked on a path toward greatness.

It represents the maturity of the student, who has gained the knowledge and abilities necessary to become a true master.

Achieving the 2nd-degree black belt signifies that the student has achieved mastery over both body and mind and is now ready to start cultivating their potential in order to create a lasting impact in the world.

At this point, they become a pillar of hope and inspiration for others as they progress through their journey.

With every successive level attained, from 3rd-degree up to the 7th-degree black belt, this individual becomes more resilient, calmer, and more insightful than ever before – an embodiment of wisdom and peace that others can look to for guidance and support.

Thus, achieving excellence in martial arts takes great dedication and perseverance, but it is ultimately worth it in order to gain mastery over oneself and achieve one’s full potential.

Earning this advanced belt requires many years of dedication, training, and discipline, as well as a deep understanding of the art itself. To obtain an 8th Degree Black Belt, a martial artist must have extensive knowledge of both striking and grappling techniques, as well as advanced knowledge of weapons such as swords or nunchaku.

With unwavering determination and incredible focus, he embodies the essence of the 9th-degree black belt (Dong Seung), which is defined as “continuing to move forward and never giving up.”

Whether he is developing new techniques in the practice studio or taking on a difficult opponent, this martial artist never backs down from a challenge and refuses to settle for anything less than his personal best.

Through perseverance, dedication, and hard work, he has truly become an inspiration to others. And by constantly striving to be his best self, he continues to embody the ideals of balance and excellence that are symbolic of martial arts.

A fictional and fantasy story tells, new students began training with white belts as they started. Over time, their sweat discolored it to yellow, then dust and dirt rendered it even darker, where it went to red with bloodstains and eventually turned black with a lot of dust, dirt, and blood.

The students were not allowed to wash the belt as it could wash away the experience.

This story has been passed from generation to generation and from one martial art to another, but it has nothing to do with history.

The masters derived the belt system in Taekwondo from the traditional martial arts belt system that was used in Japan.

The Japanese martial arts were divided into two main categories: Kendo (sword fighting) and Judo (grappling and unarmed fighting). Each category had its own set of colored belts, which denoted one’s level of mastery over the art.

A man named Choi Hong Hi. Choi developed the Taekwondo belt system. He was a Korean martial arts master and politician who founded the International Taekwondo Federation (ITF) in 1966.

The ITF is still active today, though it is no longer the largest governing body of Taekwondo.

Choi is also credited with creating the ITF’s ranking system, which assigns colored belts to show a student’s level of mastery over the art.

Mr. Choi developed this system to standardize Taekwondo and make it easier for students who were already familiar with other martial arts styles to learn this one.

The ITF created a belt system that many other governing bodies of Taekwondo have adopted.

The International Olympic Committee (IOC) used this system when they accepted Taekwondo as an Olympic sport in 2000.

White is a beginner’s belt. The student needs to learn basic kicks and punches, how to fall safely, and proper etiquette for the Dojang.

This is when the student needs to learn more advanced kicks and punches, self-defense techniques, and how to spar with a partner.

The third belt is green and requires even more advanced techniques, such as spinning kicks and high jumps.

This belt even requires even more advanced techniques, such as spinning kicks and high jumps.

The red belt is the highest belt level in the International Taekwondo Federation (ITF). Achieving this level represents many years of dedication and hard work, and it signifies a true mastery of the art of taekwondo.

To achieve the coveted rank of black belt in ITF taekwondo, one must demonstrate mastery of all aspects of the art. This includes technical proficiency in all kicking and hand techniques, as well as detailed knowledge about proper form and body posture.

In addition, a black belt candidate must show a deep understanding of the underlying philosophy behind taekwondo, demonstrating respect for others, strong self-discipline, and unwavering focus and determination.

Q: How long to get a black belt in TKD?

The time it takes to get a black belt in Taekwondo varies from person to person. This is because each student has different abilities, and this will be reflected in how fast they progress through their belts.

Q: What is the highest belt in Taekwondo?

The highest belt in Taekwondo is the ninth-degree black belt. This is also referred to as “supreme master level” and is awarded by the World Taekwondo Federation (WTF). This is the equivalent of a Ph.D. and represents a lifetime of dedication and hard work in the art of Taekwondo.

Q: What is a Dan in Taekwondo and How Do You Get Them?

A Dan, or dan degree, is a high-ranking rank in the art of Taekwondo. There are various levels of Dan ranking, each signifying a different level of mastery and skill in the practice.

To earn a Dan in Taekwondo, you must pass rigorous tests that demonstrate your ability to perform specific techniques as well as your knowledge of the history and philosophy of this martial art.

These tests typically involve demonstrating proficiency in a range of moves and sparring sessions with multiple opponents at once.