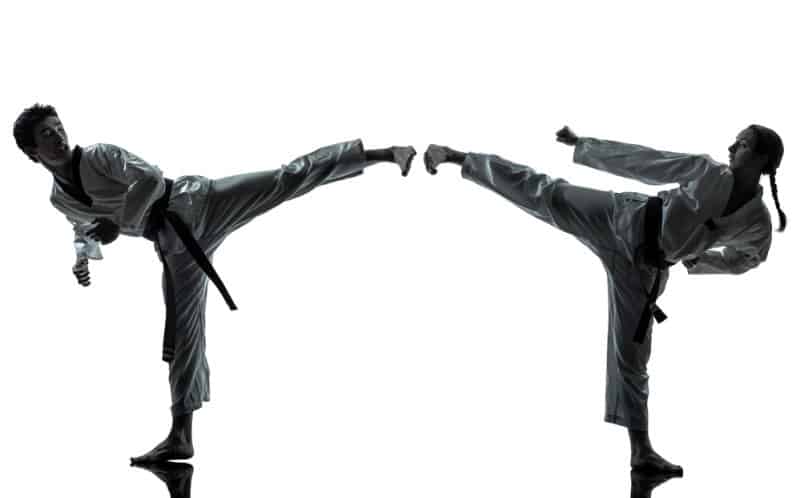 Is Taekwondo good for self-defense? Taekwondo has many advocates when it comes to self-defense. They believe that the main reason martial art came into being was for combat – used in military combat – and was not a sport.

The pioneer practitioners, including Nam Tae Hi, were widely known for their lethality. And today, the available taekwondo styles like Chun Kuk Do, Jhoon Rhee taekwondo, and ITF-style emphasize self-defense.

Many people believe that Taekwondo is not an effective form of martial art when it comes to self-defense.

Some forms of martial arts like Mixed Martial Arts and Krav Maga incorporate many new lethal fighting techniques. Others like Karate and Kung Fu stick to the traditional roots.

Is Taekwondo effective in self-defense?

Yes, it is. Unlike many other martial arts, taekwondo does emphasize kicking but also has punching and self-defense scenario training.

The training you get all depends on the school you go to locally or if you do online training.

The school you go to will have a different focus depending on which school you attend.

Many schools teach sports Taekwondo which involves mainly kicking your opponent to gain points. You can also punch but most tournament fighters kick.

Tournament Taekwondo will not be as effective in a street fight or in a self-defense situation.

There are schools that will also teach Taekwondo so you can defend yourself in a bad situation. They train you to fight back against an attacker.

If you are looking to train to fight then you need to look for a Taekwondo school that teaches self-defense.

Taekwondo practitioners like doing kicks. The idea is that the legs are stronger and longer than the arms so the legs are more effective in fights.

However, it is easy to see just by watching MMA that knowing all three fighting ranges would be best for self-defense.

If you are looking to get good at self-defense you need to learn how to kick, how to punch, elbow strikes, knee hits, and ground fighting.

The reason to learn all three ranges from long range (kick), short range (punch, elbow), and ground range (chokes, joint locks) is that you do not know the range the attacker will be good at.

If you are good at kicking and they know ground fighting then all they have to do is get you to the ground. If they do that you lose.

Typically, to remain safe, you have to know your surroundings and avoid any dangerous situation.

Knowing a martial art that focuses on self-defense as some Taekwondo schools do will help. You should also learn the best way to de-escalate a confrontation.

The effectiveness of taekwondo in self-defense will also highly depend on some other factors:

Consistent training in taekwondo will improve your reaction time and fitness level.

What techniques are used in taekwondo for self-defense?

Taekwondo moves are important, but your training and physical conditioning will play an important part in street fights.

Here are some of the technical aspects that can be effective in street fights.

Mostly, competitive martial arts employ various stances. One of the stances, the fighting stance, is more effective when executing defensive and offensive movements.

It will protect your body from the common fatal openings in case of a real fight.

The side steps are defensive moves that will help you evade blows and counter-attack more effectively. This move is self-explanatory, but for it to work, you will have to practice and perfect it with time.

Most amateurs use may charge you in a street fight, but a taekwondo sidestep is an effective counter against the move.

The long stride will help you move further to avoid being tackled.

Footwork is such a key to fighting but is not always taught to people at martial art gyms.

Taekwondo footwork and many skips such as the side step. Skip movement has its foundation in the assumption that opponents in taekwondo competitions use the whole length of their legs.

To mitigate the problem, the fighter has to skip in and out of the kicking range. That is more helpful in street fights when the opponent is armed with something like a short knife.

I actually call this same thing foot replacement. This is the same concept I take my back foot and bring it forward to replace my front foot. The front foot can go forward or I can use it to throw a kick depending on what my attacker does.

Blocking strikes come naturally. Your body will raise your arms and hands to protect your face and head when in dangerous situations. Apart from protecting the face, your body will prioritize your eyes.

Blocking drills also keep the legs ready and the eyes open for a counterattack. Proper blocking will reduce injuries to both the attacker and the defender and still maintain composure and balance.

This is a kick you can do fast and hard. You do what we said above replacing the front foot with the back foot. You then take the front foot and snap it into the groin of the attacker.

This is my favorite kick and the one I would use in a fight to defend myself.

The position extends your leg’s full power and is very powerful. It is the best way to protect yourself against many opponents charging in at you.

I did a sidekick in a kickboxing match I had and ended up breaking 3 of the guy’s ribs. If done right this kick works.

Also known as the roundhouse kick, the forty-five kick is easier to execute with faster recovery to attack the lower body or mid-section. This kick is powerful if done right plus the kick is fast.

The great thing is this kick will keep the opponent guessing of your target point.

Is learning taekwondo good for protecting yourself?

Taekwondo can work to protect yourself if you learn self-defense in your training. This is why we suggest you find a local school that teaches how to fight.

Your mental strength will play an important role in winning any fight and overcoming an attacker in a fight.

You need to do enough training so the moves are ingrained in your body. This way if a punch is thrown you react without thinking about it.

How do you train at home in taekwondo?

People learn taekwondo in a gym, but it is also good you practice the techniques when in your home. You can practice anything that you learn in the gym when at home.

If you decide to take Taekwondo at a local gym you can practice the moves that you learned that week at home.

When I trained in martial arts I went to the gym two days a week then trained at home for an hour 3 days a week.

You can just shadow box at home but it is better if you can buy a punching bag or striking bag to train with. The items are not that expensive and they will definitely help with training.

When practicing your techniques make sure you do them correctly and not just go through the motion. When we train we try to imagine we are actually in a fight or defending ourselves.

Taekwondo with the proper training can be used for self-defense. It is a martial art that is very fun to learn. There are plenty of schools in the US for you to find the right one to train. If you want to train online you can check out our free online training.

You may also like: Is Karate Good for Self-Defense (Depends on the Style)