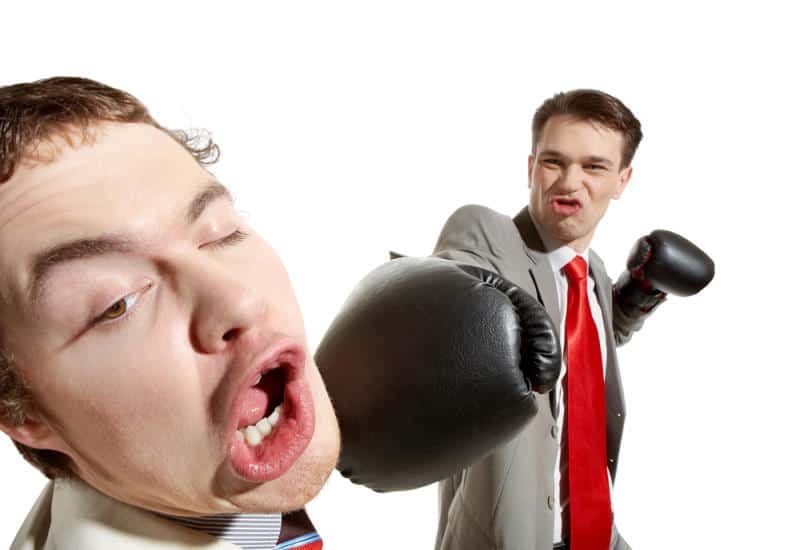 You want to learn self-defense or how to fight so you can protect yourself or your family.

People often ask what are the weakest parts of the body to punch for maximum damage to an attacker. There are several areas people already know like the groin or eyes, but the number one area to strike for maximum damage is the throat.

The throat is very easy to damage with a single punch or strike. The only issue with this strike is you can collapse their windpipe enough to kill them.

Unless you are in fear for your life you want to be careful when using this in self-defense.

I tell my wife and teenage daughter if attacked do this first. Strike hard and strike fast to stop the attack and get away.

We talked about the number one place to strike the body if you are in danger but let’s look at what else you can punch or kick to stop an attack.

You have to shove your finger into the eye on this one. Hopefully, you never have to get that close to an attacker but if you are pushing your fingers or thumbs into the eyes of the assailant.

You can just poke the eyes but really thrusting the fingers into the eye socket will stop the attack.

Get mad and really fight hard to stop an attack. I know it sounds bad to do this but it may be critical to your survival.

You need to do whatever you have to do to get away. This includes sticking your finger in their eyes and as far in as you can.

I love this technique because it’s fast and can cause some damage. You really need to know how to throw this groin front snap kick to be super effective.

You use the lead leg or strong leg to thrust your foot up into the groin of your attacker. The best would be to pepper spray them, kick the groin then run.

Kick to the knee

I am not a big fan of doing a bunch of kicking in a self-defense situation or in a street fight. Kicking someone effectively in a fight is really difficult unless you have trained to fight with kicks for 5 or more years.

I do like the groin kick which I would use right at the start of a fight.

The knee kick is another good one. It is a hard, low kick, and a quick kick to hurt the knee.

This kick you are going to need to know how to do it and really practice. It’s a low kick which is the only type of kick I recommend in a fight or self-defense.

The kick to the knee can easily drop the attacker if you do it right. It does not take much to tear their ACL or to break the knee. If they cannot walk they cannot attack you.

Hit the nose and hit it hard

The hit whether using a punch or a palm strike can be very effective. If you can hit the nose hard enough to break it then it will bleed and the eyes will water up. This will give you some time to get away which is the objective.

You need to know that just one punch may not do it you may need to hit the nose multiple times.

They also may not be standing still if you start fighting back. You can expect they will move to make sure you have other punches, elbows, knees, or kicks you can do to end the attack.

Hit the chin to knock an attacker out

You can cause a knockout by hitting the attacker in the chin. This will cause the brain to move rapidly in a back-and-forth motion. If the hit is enough then the brain will be slightly damaged and the motion of the brain causes you to lose consciousness.

A knockout ensures you can get away from an attacker because they are lying on the ground out cold.

The key is can you hit the chin with enough force and accuracy to knock an opponent out.

It will require some good skills in punching. It is not really easy to land a punch to the chin of a person to knock them out. You have to be really good and fast at punching.

If you ever watch a street fight these guys or women never go for the stomach or solar plexus.

Everyone aims for the face but most people’s stomachs are weak. One swift hit or kick to the stomach and they are down on the ground.

If you do hit the stomach or solar plexus and they bend over to catch a breath, keep attacking. You can do a quick knee to the head or kick.

If you know for sure the one hit will stop the attack so you can get away then do it. If you need to do a few extra hits to escape then do what you need to do.

The temples are located between the eyes and ear. This is a soft area on our body that is susceptible to attack.

A sharp hit to the temples will cause issues with the arteries that run in that area. The hit can knock down the attacker or cause them to lose consciousness.

Hit someone in the ear may cause the attacker to lose hearing and can disorient them.

If the hit is hard enough you can rupture the eardrum causing the attacker to hopefully become disoriented. You only need a small amount of time to get away.

You can kick the shin or rake down the shin with your shoes if an attacker has grabbed you.

Muay Thai fighters have numbed this part of the body so this would not work against a Thai fighter.

Most people have not trained in Muay Thai so this should work 99% of the time. This will just hurt and not incapacitate so you would have to add some other fighting moves to knock out or seriously hurt an attacker.

Use the foot stomp with the raking of your foot down the shin. Rake your foot or heel down their shin then finish with stomping on the foot. You want to do it hard enough to break a few bones. The foot stomp if you can hit the toes with the stomp is even better.

Strike to the ribs

You can hurt someone badly with a strike to the ribs. It has to be a really solid hit to break ribs.

I fought in a Toughman contest when I was 21 years old. The guy I fought only knew boxing and these matches were boxing and kicking but kicking was above the waist.

The guy I fought was a better boxer than me so in the second round I did a kick to his ribs. Needless to say when he went to the hospital the x-rays came back with 3 broken ribs. Hitting the ribs hard enough can break them.

When you are attacked or in a fight for your life then you have to do what is necessary to win. Once you have stopped the attack then run and get away.

You need to aim for the weak parts of the body when fighting back. Training is a very important aspect to fight off an attacker or for self-defense.

You can try out our free online training.

You may also like: Self-Defense Basics (How to End an Attack)