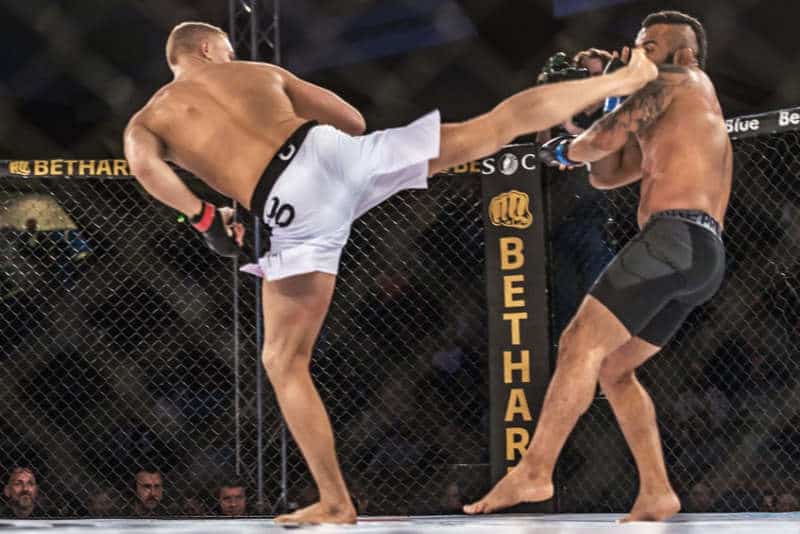 You may be wondering what is MMA? This is mixed martial arts and it is a system to learn how to fight in a ring or cage.

Using these skills a fighter enters a ring to fight against another opponent of equal weight and skill. This is similar to boxing but you can kick and take opponents to the ground to do ground fighting.

MMA is a sport and UFC or Bellator is the name of organizations to sponsor fighters and fights.

The same thing as football is a sport and the NFL is the organization.

What is Mixed Martial Arts in the United States

MMA was introduced into the United States back in 1993. It was called the Ultimate Fighting Championship (UFC).

I remember watching this in college on pay-per-view thinking how crazy this was being hardly any rules and no weight classes.

One of the fights had Telia Tuli against Gerard Gordeau but only lasted 26 seconds.

The thing is Telia was 400 pounds and Gerard was only around 200 lbs. Gerard knocked out 3 of Telia’s teeth with a roundhouse kick to the head.

I watched this and thought that it was the craziest thing I had ever seen.

The “no holds barred” fights came to an end with the implementation of rules and regulations.

What are the Rules for MMA

The rules of MMA when training or fighting in the UFC is as follows:

Other organizations around the world have varying rules. Some organizations kicking or hitting an opponent’s head while they are down is allowed. This is not allowed in MMA in the United States.

Here is some of the training we did at our gym.

You need to spend equal time training in both ground and stand-up fighting. The amateur MMA fights that I go to watch where the guys at my school fight, most amateur fighters are proficient at Jiu-jitsu.

The amateur MMA fighter’s stand-up skills are not really good so most fights go to the ground and the better ground fighter wins.

Many fighters will train in one martial art for a long time then transition to MMA. You will see many collegiate wrestlers transition from wrestling to training in MMA.

There are also many Jiu-jitsu practitioners that have gotten really good at Jiu-jitsu and they take those skills with them over to the UFC.

Once they train in MMA and feel they are good enough amateur fights can be set up for them.

How do you get into MMA

There is what is called a safety ladder progression to get into MMA fight matches.

Just like boxing, you have to prove yourself in the lower fight training levels before being allowed to fight as a professional MMA fighter.

I know in Ohio you have to have so many amateur fights with winning opponents before you can get your pro-fight card.

The Ohio Athletic Commission is the governing body to get your status for MMA. Each state may have some different rules so check with your state athletic commission.

You will need to find a local MMA gym if you really want to be a fighter. If you are at a good MMA gym they will know how to connect you with promoters.

The promoters help to set up some amateur fights for you once you get good enough.

I have watched several amateur MMA matches and some of the combatants probably should have not been in the ring.

They looked horrible and I would assume that is because the martial arts or MMA gym they went to did not train them properly.

What are the MMA weight divisions

MMA has weight classes to really make fighting fair. If you have two guys with the same fighting skills the much larger opponent will usually beat the smaller ones.

The larger fighter has an advantage just because of size, power, and weight especially when fighting on the ground.

You can check out several sites to see fighter rankings.

UFC site – The UFC main site showing up-and-coming fights. The site also has everything going on in the UFC.

Hopefully, you know more about what is MMA and how it came into existence. We reviewed how the UFC started in the United States. Talked about how most fighters train, where they train, and the different weight classes.

The last thing was we reviewed the different MMA organizations that put together fights, promote the sport, and are responsible for the awards/belts.

You may also like: MMA Training How do MMA Fighters Train and Is MMA Good for Self-Defense