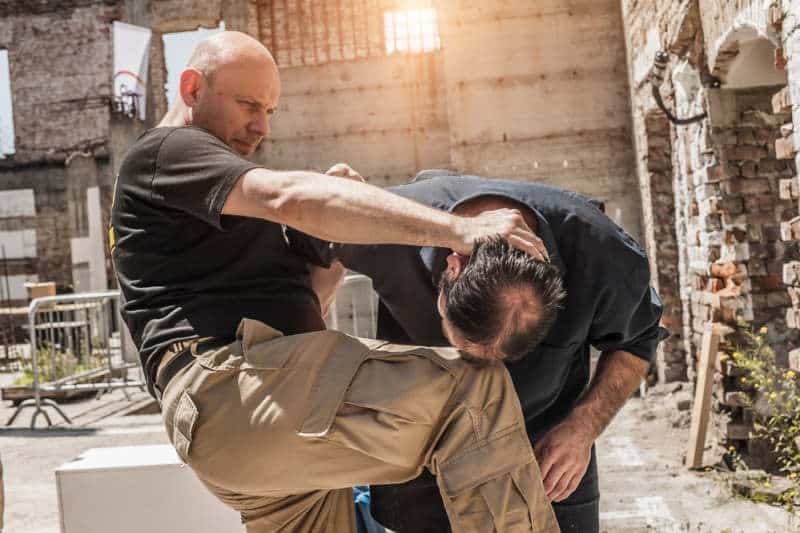 It is hard to find a mixed martial artist (MMA) who does not rely on the effective striking of Muay Thai also known as Thai Boxing. Many people ask if Muay Thai is really effective in a street fight. It is very effective especially when in close combat where you can use elbow and knee strikes.

Many MMA fighters are able to use various techniques that they borrowed from Thai Boxing in the MMA ring.

They have all used these deadly techniques from this incredible fighting art to devastate opponents in the UFC octagon.

These big names in this sport have relied on the skills and techniques they have obtained from Muay Thai to succeed.

What is Muay Thai?

Also known as, Thai Boxing, Muay Thai is a cultural martial art and the national sport of Thailand.

The sport came into being many centuries ago and is close combat that uses the whole body to attack and counter-attack.

Modern scholars are not aware of its origin because most of its history got lost in the 14th century.

The Burmese ransacked the Siam capital city, Ayudhaya, in Thailand. Burmese looted depositories and temples of the knowledge Ayudhaya held.

Is Muay Thai really effective in a street fight?

Muay Thai is effective in the street because of the deadly techniques they use. It does not take too many elbows to the head or chin before the opponent is knocked out on the ground.

UFC fighters use these techniques to do battle in the ring every day. They use them because they work and are effective.

The key reason Muay Thai is more effective in street fighting than some other martial arts is how brutal the strikes are to the body.

Every strike in Muay Thai is meant to hurt or stop an opponent.

The one weakness of Thai in a street fight is if the opponent takes them to the ground.

If the opponent knows Jiu-Jitsu and gets a Thai fighter on the ground then the ground fighter will likely win.

Unless the Muay Thai practitioner can knock out the ground fighter before going to the ground.

Muay Thai is effective in a street fight but you should also know how to fight on the ground.

The more you know about how to kick, punch, elbow, knee, and ground fight the better chance you have of defending yourself.

What techniques in Muay Thai to use in a street fight?

Boxing is confined to punches, and kickboxing involves punches and kicks. When going against a Muay Thai fighter they will use fists, elbows, knees, shins, and feet.

The two most common weaknesses in Muay Thai they do not train in ground fighting skills and there is no weapons training.

In self-defense situations, Muay Thai offers many techniques that maximize the opportunity of executing counterattacks.

Here are some of the techniques that can be effective in street fighting.

Most people regard the roundhouse kick as the most powerful or destructive strike.

The kick is similar to those common in karate and kickboxing. In the most basic form, the fighter pivots on their lead foot and generates power by thrusting their open hip before they make contact with the lower shin.

The fighter performs swinging motions with the rear arm as a way of increasing the power in the kick.

Fighters use the kick to attack the midsection, the leg, and the head of an opponent.

We recommend if you are going to kick in a street fight keep all kicks should be below the waist.

If the attacker catches your leg you would be at a severe disadvantage. You should not do high kicks because it is too risky when in a fight.

The low kicks of the lead leg are equal to the jab. Even though the low kick is inadequate to knock the opponent out, it has several uses in street fighting.

A quick example, like the jab, a fighter can use it to fend off an attack. It is also enough to unsettle the opponent to force them into opening their guard.

The lead leg low kicks can punish the lead leg of an opponent in the course of the fight and limit their motion. That alone is enough to make them a target.

You can also use the teap kick which is used to hit the midsection and stops the opponent in their tracks. It is a great way to do some damage and keep the opponent at a distance.

If you have been watching Thai Boxing or MMA matches, you might have come across the horizontal elbow technique. The strike is one of the impactful techniques of Muay Thai.

The straightforward motion demands both body balance and timing.

The fighter aims at throwing the elbow to reach the opponent’s temple or chin while keeping his elbow in a level parallel to the canvas. When timed perfectly, the impact of this strike can be devastating.

The technique is easier to master, but it can be hard to land on your opponent, particularly if he has good guard and defense.

I love elbow strikes but you have to be close to using them. You also really need to be good at them to make them work. Once you have this strike down, it will be lights out for the attacker if you connect with an elbow.

Striking from the clinch

When you ask the question is Muay Thai really effective in a street fight I immediately think of the clinch.

A Muay Thai fighter must learn the clinch to succeed. The higher-level fighters rely on the clinch when dealing with attacks.

Clinching is not only effective in street fighting but also good for people who want to improve their Thai Boxing and MMA skills.

The clinch involves grappling on the feet with the aim of working into a dominant position.

The fighter faces the attacker and holds the back of the opponent’s head and leverages the arms.

From this point, he can land deadly strikes to end a fight. Some of the impactful strikes include the straight knee, side knee, and elbows.

The clinch when done right you can control the attacker moving them where you want. This is effective with multiple attackers.

The clinch below shows how Muay Thai is effective in a street fight.

The switch kick is among the beautiful techniques if done properly. The technique requires both power and speed to execute it.

The technique is useful in closer range and effective in street fights. Most fighters use it against opponents with a poor guard. The kick can work like a snipe or a whip that is unpredictable and can catch an opponent off-guard.

You are too close for the normal roundhouse kick in Muay Thai so you just switch your feet to give enough distance to the rear leg that switched. That rear leg is the one you use to kick.

Muay Thai is one of the best striking arts in the world. People have tested it in competitions and real-life situations in the last few years. They have also refined it to be efficient, fast, and powerful.

The elbow and knee strikes alone make this art very powerful. The striking ability of a Muay Thai is incredible.

If you are an average person can you kick or hit like a top fighter? The answer is no you would not be able to hit that hard but you don’t need to hit as hard as a pro.

These strikes even at 60% can drop an attacker to the ground. One well-placed elbow to the chin or knee to the gut will send your opponent to the ground.

How do you train at home in Muay Thai?

Muay Thai is designed to enhance body fitness and toughness for recreational practitioners and ring competitions. You can start your training at home by just buying boxing gloves and a punching bag.

Adopt a workout schedule every week with a routine and then vary it up every week.

To build anaerobic endurance you should engage in exercises like kicking, punching the heavy bag, shadow boxing, and clinching the bag to do multiple knee strikes.

If you need to learn how to fight or do self-defense you can take our free online training program.

Why is Muay Thai deadly?

Muay Thai teaches the fighters simple but straightforward techniques that are more effective in real fights.

It does not focus on the fancy moves that do not work in real combat situations.

That provides the fighter with a physical advantage over the opponent.

We know most people will not go out and kick bamboo trees to toughen up their shins.

Sparring is the primary learning method in Muay Thai. Muay Thai practitioners, therefore, spar right from the start of training.

They have to face real opponents and learn from them. It does not involve punching air, a fact that provides the person training with a close to the real life-fighting situation.

The gym can’t simulate what happens in real life. Sparring or hitting pads at least gives you the feel without the damage or pain.

Muay Thai is an incredible sport that can be used to fight off an attacker in real life. There are limitations to Muay Thai since the system does not teach ground fighting.

You can take classes in Jiu-Jitsu while training in Muay Thai. You can also take MMA which has both fighting elements in it.

I know we talked a lot about Muay Thai fighters but you do not have to be a fighter to get the training Muay Thai offers.

You just need a local gym or take our online training program. Anyone can learn this martial art and use it to fight off an attacker or to protect themselves in a street fight.

You may also like: Is MMA Good for Self-Defense (Pros and Cons)