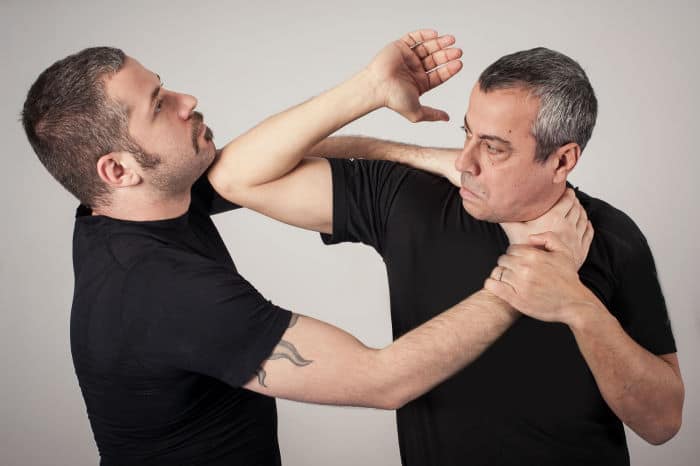 Walking home alone or being in an area that is dark and unsafe is not where you should be. These kinds of scenarios play out all around the world.

Women and men get attacked when they least expect it in areas of the city they should not be usually at night.

Safety needs to be everyone’s number one priority because the alternative is not good.

There are many fighting systems in the world that can train you to fight off an attacker.

Our top martial art systems that are on our top list can actually get you ready to fight back quicker than you probably think. Many of the fighting martial arts work to quickly train you in what works when attacked.

I am surprised by how many men and women do not carry pepper spray. I carry it and I am a highly trained fighter so why don’t you?

It is so easy to have ready to shoot at the attacker to blind them so you can get away. If they cannot see it will be hard for them to chase after you.

I know this is not an actual technique but using pepper spray for self-defense is a must.

There are certain things you should do when carrying pepper spray for self-defense. We are going to review what you need to know followed by a video.

This is not the easiest technique to use against an attacker but it is best if your life is in jeopardy. Only do this if your life is on the line because this hit to the throat can kill.

Hard to say what scenario you would be in when throwing the punch, karate chop or hammer fist to the throat.

The variables are many but you need to make this simple.

If someone comes up you and grabs your arm or they start pulling you into a car or van then strike fast. You never want to ever go to a second location.

You need to fight for your life at this point.

If someone comes up to you and asks you for your money than just hand it over. No need to die over a wallet or purse especially if they have a weapon.

You would not throw a throat punch if someone was just robbing you.

Everyone knows to kick in the groin but do you know how to do it quick and accurate.

Most people are facing you when you get into a confrontation. It does not matter if you are a guy fighting another guy or women defending against a guy attack this kick works.

You can even use this kick when the person is in a short-range. Kicks are usually used for long-range attacks but this works for both short and long-range.

This is the front snap kick.

I used this kick once in college some guy was getting into it with me. He had a beer in his hand by his waist so I did a snap kick to his hand and the beer went flying.

He looked at me not knowing what to do then decided picking a fight with me was not a good idea. No one got hurt and we both walked away which is how things should be.

You really need to practice this kick especially if you do foot replacement to get the distance or to quicken the speed of the kick to the groin.

See the foot replacement in the video below.

You get good at this kick and it will be one of your best weapons in a fight or when defending yourself.

You may be asking why I put headbutt as a self-defense technique. Here is the reason most people can’t fight. If they cannot fight, they may try and grab you to hold on especially if losing a fight based on standing up.

Standing up means the fight is all punching or kicks and not ground fighting.

If you are fighting that close you are in a position to headbutt them right to the nose. This will break their nose and cause the eyes to water so you can getaway.

I know this works because a big bully picked a fight with me at Burger King in the parking lot. I tried to talk this guy out of picking a fight with us but he was adamant about fighting.

He ended up punching me in the forehead for some odd reason. Probably because he actually sucked at fighting. I punched him about 10 times before he knew what was happening. ‘

Realizing that I had much quicker hand speed he tackled me to the ground. This was smart because he weighed about 60 pounds more than me.

I was able to get him off of me and to get back to punching when he grabbed me and would not let go.

That is when I grabbed his long hair and head-butted him about 4 times. He fell to the ground and that was the end of it.

You can see if done right and in the right self-defense situation, a quick headbutt can really hurt someone.

This is not really a self-defense technique but it works. Just avoid bad situations or even worse situations.

Here are some things not to do:

I was at a party and I had just one of my friends there (my one friend with me cannot fight at all).

Two guys I did not know were saying to my friend before I got there that they were going to beat me up. The reason was 6 months earlier I had dated the same girl that he was dating now.

I can fight one guy but two guys bigger than me is a bit tough. I left the party and came back when the numbers were equal.

Let’s say the guy did not want to beat me up when I had two 6-foot friends with me and both are badasses.

I left the party to avoid me getting pummeled because both guys were much bigger than me and it’s hard to fight two people.

Funny how my 2 friends the same size show up and now they are not interested in fighting.

I avoided getting beat up that is what you should do.

Avoid and walk away to live another day and not go to the hospital.  I probably should have not gone back to the party later but my other friends had shown up. They called me to get over there because they heard that these guys threatened me.

In case you were wondering how it ended this was in college and as I came up the stairs with another friend the guy that threatened me was running full tilt down the stairs.

My two badass friends were yelling at him to run faster. My buddies did not like this guy threatening me and forced him to leave the party running.

Being a guy some of you will not like this technique. If you are cornered and need to fight then just do a few hits to knock them back or down and run.

I know running especially when you are younger is not manly but neither is being in the hospital all messed up.

What you need to do:

You see what we are doing here. You want two good hits and hopefully, you knock him down or knock them out then run.

Why run? You may not know if he has friends so a few shots then getting out of the situation is your best bet.

You also do not know who has a gun or knife.

If you are a beginner in self-defense or fighting than these techniques should help when starting out. You definitely should know how to do the basics like hitting, kicking, and self-defense moves. This way if you are cornered you can fight back.

The other advice we give that everyone can do and that is to be aware and avoid bad situations. Life is too short to be in fear so take charge of your life and learn how to defend yourself.