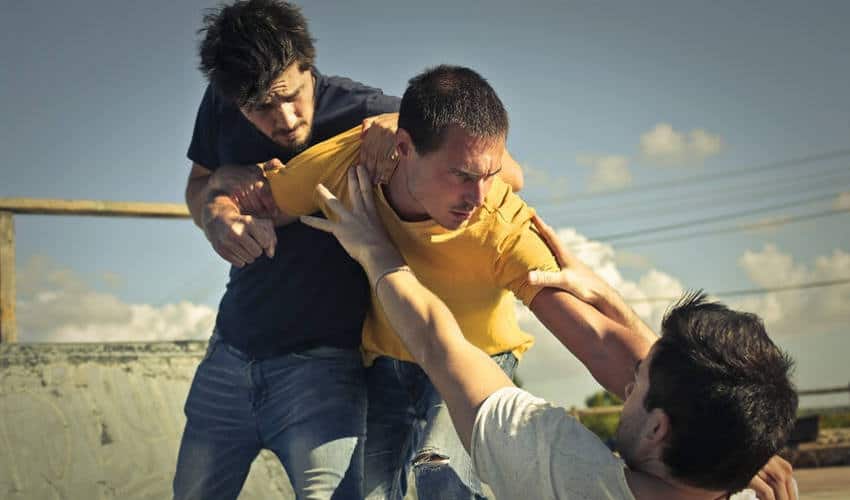 No matter what your background is, nowadays, it is important to be safe and know how to defend yourself. You need to know how to fight back to protect yourself and your family.

You don’t need to take martial arts your whole life to be successful and capable of defending yourself.

What is the best martial art in a street fight?

We pick Jiu-Jitsu as the number one martial art to learn to fight and defend yourself. You can easily subdue an attacker if you just know a little bit of jiu-jitsu. Just 6 months of training would give you some techniques to stop an attacker.

You will see below we run down the top 7 martial arts we think are the best for defending yourself in a fight.

The key is to find which one best suits your body type and natural ability.

You can also check out the training we provide on our free training page.

Below, we discuss you can defend yourself in a street fight with only a few months of training. It all depends on how you train.

Here are the 7 top martial arts to learn how to a street fight.

This is the main combat sport that began at the same time as kickboxing. Muay Thai originated can also be called “Thai Boxing”.

This is another style of street fighting that has to do with military defense. It was actually created after a similar type of fighting was used in actual combat and war.

Many people often see a large similarity between Muay Thai and boxing. Although they are similar, they are not the same.

You can use punching, elbowing, kicking, kneeing, and wrestling in this combat.

This specific kind of fighting takes a lot of conditioning and is not necessarily very easy to catch onto.  This is always a good combat technique to have under your belt, and it is one of the best for street fighting simply because of its brutality.

Here is my favorite Muay Thai fighter so you can see how brutal this martial art is when used properly. The fighter is Buakaw.

This is a well-known fighting system for self-defense in the military. Krav combines wrestling, boxing, judo, karate, and other forms of martial arts. It is known for being realistic fight training.

Just check out the video below and you will see why this is one of the best martial arts for a street fight.

This combat system is basically meant for real-life and real-world situations and is very efficient.

Krav Maga was actually based on off-street fighting from a well-known martial artist, Imi Lichtenfeld.

This really focuses on channeling your inner anger to be a good street fighter. There are several military bases that teach this fighting style internationally and there are many different forces that use this currently in Israel.

You can easily take lessons specifically on Krav Maga and you can also easily learn it from online lessons.

This is a non-classical martial art that heavily focuses on the philosophy and experiences of Bruce Lee. This is not set on a fixed outline, it does not necessarily have any rules or patterns, it is completely guided by thought and perception.

Fighters of this martial art believe that to succeed the most and have the maximum effect, you want to have the least movement possible.

You do not want your opponent to know what is coming next, instead, you want to focus on attacking while your opponent is about to attack.

This would be good in street fighting because Jeet Kune Do takes what is useful in fighting from other martial arts.

Bruce Lee believed that this form of martial art was “dry land swimming” and that a good fighter should “be like water”.

This is a full-contact sport that basically mixes many techniques from all martial arts. The first MMA league was actually created in the United States. MMA is also not just currently based on men, there is also women MMA. So, no matter what your gender is, you are capable of street fighting and self-defense, don’t let that stop you.

There are not nearly as many rules and guidelines in MMA as in some other martial arts. You can use all strikes in this combat-driven sport.

You can’t hit the groin, take out the knee, eye gouge hit the back of the neck and there are a few other rules for safety.

This is definitely great for street fighting. You just go look at MMA fighters on YouTube where someone stupidly picked a fight with them.

To learn more about training in MMA you can check out our free training videos.

The beginning of MMA had all types of martial artists with different techniques and backgrounds fighting. Now it has more rules and weight divisions but is just as deadly in a street fight.

MMA is great training for street fighting because it is a mixture of some of the top martial art techniques in the world.

Judo is currently an Olympic sport. It is very modern and super competitive.

This martial art focuses on getting your opponent to the ground to do a joint lock or a choke. It definitely focuses on your strength and can be very dangerous.

Judo also focuses on the mental part of martial arts as well. This martial art has made a huge impact on MMA as I mentioned earlier as well.

Judo is great for street fighting because you learn how to successfully get your opponent to the ground. Most people cannot groud fight.

Boxing consist of two opponents wearing gloves, however, this may go a little different in street fighting.

Boxing consists of throwing punches at each other. This is also an Olympic sport and actually has its own championships.

There is currently amateur and professional boxing.

If you had two boxers in a street fight it would be all fist flying.

Boxing can be very damaging to your body and can cause serious injuries especially if no protective gloves are being used.

It is a very hard sport on your body and head.

Jiu-Jitsu is known as ground fighting. It originated in Brazil and is a combat sport. This is one of the best if not the best martial art for a street fight if you want to win.

Jiu-Jitsu Is similar to Judo because it was created based on Judo.

BJJ fighter Royce Gracie was the first UFC champion who used the Jiu-Jitsu fighting style to win it.

Jiu-Jitsu is great for someone who may be smaller or weaker than their opponent.

Jiu-Jitsu uses skills that do not depend on size and strength. This can be very useful in combat or street fighting.

This is the martial art I recommend people start with when looking for training in self-defense.

You can learn basic techniques rather quickly. In this martial arts, a smaller more skilled Jiu-Jitsu fighter can beat a bigger opponent.

Grappling is always used in physical combat to take physical advantage of your opponent.

Jiu-Jitsu is well known for being used in MMA, hand-to-hand combat, and self-defense. There are several types of grappling including clinching, takedowns, throws, sprawling, and many more.

You can use stand-up grappling which is when you start fighting from a stand-up position. However, if you do not fight well standing up, you can take your opponent to the ground.

This is the best street fighting martial art. Jiu-jitsu allows you to use defensive positions from the ground to guard against an attack.

Jiu-jitsu allows for controlling and defeating your opponent without severely injuring them. Many policemen or guards get trained in grappling because they take down the bad guys without hurting them too badly.

Watch this teenage girl destroy boys who think they can beat her Jiu-Jitsu.

Overall, there you have it the best martial arts for a street fight. There are many martial arts to choose from and you need to pick the one that is the best fit for you.

It is important to make sure that you take into account your weight, height, strength, and background.

You also want to make sure that you can win while doing the least amount of harm to the other person. This is one of the reasons why we like Jiu-jitsu.

It is also important to remember that self-defense and street fighting can be done successfully by any gender or race.

If you work hard and practice the technique you are capable of being a street fighter or defending yourself.

Mental strengths such as controlling your fear can be just as important as physical strengths.