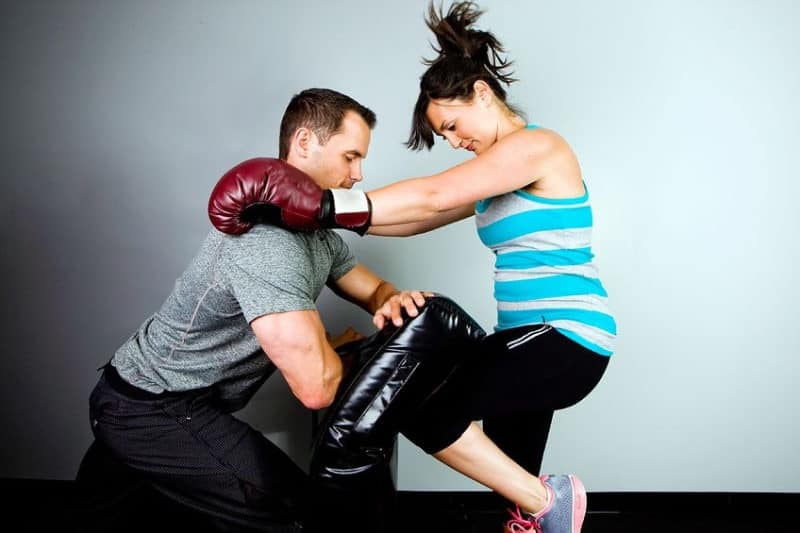 When looking to take martial arts it is really tough to know which one to take. The question to ask is what is the best martial art for self-defense? If you are in a fight with one person then Brazilian Jiu-Jitsu is the martial art where you can defeat much larger opponents.

Many MMA gyms only take actual fighters so if you cannot find a local MMA gym you can find a Krav Maga school which is our third pick.

There are many more styles and martial art gyms out there that teach self-defense.

We will review the different martial arts that we think really prepare people for self-defense. It will be up to you to figure out which training program best meets your needs.

When it comes to self–defense nothing is better than Jiu-Jitsu. This martial art was developed to allow weaker and smaller people to be able to beat larger opponents.

Jiu-Jitsu is ground fighting so you take the opponent to the ground and use different submission holds to win. The techniques are incredibly effective when used in a fight situation.

My son was 7 when he started training and I remember the first week of class. They teach a technique to the kids and then at the end of class the kids will spar with each other trying to use the techniques they learn.

My son faced a smaller girl about his age and I thought with his weight and athleticism the smaller girl would have a tough time.

She had been training in Jiu-Jitsu for about three months and my son had only been there a week. Needless to say, she pummeled him, I mean it was not even close.

The reason I had my son train in BJJ is that it is a submissive fighting system. If a bully picked on my son at the playground and tried to start a fight. The training my son had would allow him to take the bully to the ground. On the ground, my son can put a hold on the bully that would cause the bully to not be able to move.

Then wait for the teacher to come to stop it.

In the end, the bully and my son would not get hurt physically as a punching fight would end.

I am not saying these techniques are not dangerous or can seriously hurt someone because they can if you take it too far.

You can train in Jiu-Jitsu for a very short time and be really effective against almost anyone. The reason is most people know nothing about self-defense or how to fight.

Jiu-Jitsu is so effective in the techniques you are taught that your average person just cannot compete against anyone who has Jiu-Jitsu experience.

We highly recommend BJJ because of how quickly you can learn just a few techniques to really help you defend yourself.

The fact that you can submit someone and not hurt them is another plus.

Mixed Martial Arts is really great if you want to learn all 3 ranges of fighting. The 3 ranges include:

The MMA gyms focus training on boxing, Muay Thai, Jiu-Jitsu, Judo, and kicks from TaeKwonDo. They take what is useful for fighting in the ring.

When I trained in MMA it was really tough physically so you need to be prepared if want to train in MMA.

When I was in my late forties’s I trained with a bunch of twenty-five-year-old guys. During that time I was in the best shape of my life when training.

It will definitely get you really good at self-defense and get you into shape.

If you have never seen MMA fighting just tune in to watch UFC fights on TV. All the fighters train in MMA so they can get the chance to fight in the octagon.

There are schools like American Top Team Gym in West Palm Beach FL where a friend of mine trains that is where serious fighters go to train.

If you are just looking for self-defense many local MMA schools may take you or you can train online. Check out the free training we offer.

This was developed for the Israeli Special Forces to be able to fight in combat. The system is geared toward self-defense tactics. They teach you the different ways to get out of fighting situations.

If someone comes from behind and bear hugs you what do you do? If an attacker grabs your arms what is the move to get free then they show how to fight back?

Everything goes in Krav Maga from groin kicks to eye gouges. You do whatever it takes to get away from an attacker.

When you first join they teach you the basics like how to stand, punch and kick. Once you progress you learn counterattacks and learn things such as kick defense, punch defense, defense against chokes, and against headlocks.

You can get even further into the training where you learn knife, gun, and weapon defense. This overall system is really good to learn if you want to train to defend yourself.

This is all about stand-up fighting and this martial art is brutal. Just watch the Muay Thai fights on TV or if you ever go to Thailand to catch a live fight.

My favorite fighter in Muay Thai is Buakaw, watch some of his fights in the video.

Muay Thai uses elbows, knees, punches, and kicks to devastate opponents in the ring or no matter where they need to use it.

The kicks are so hard it’s like being hit with a baseball bat. You have probably seen UFC fighters use leg kicks to damage the opponent’s leg so they cannot walk and thus can’t fight. Those kicks are usually Muay Thai kicks and you do not want to get hit with one.

The elbows and knees strikes are just as deadly. You can clasp an attacker in close range and start doing the Muay Thai knees and elbows to the face or body. That attacker or aggressor will be laid out in pain with broken ribs or shattered facial bones.

Why do you think all MMA fighters that fight in the UFC use these techniques in their fights? They use them because they work incredibly well.

This is definitely a great martial art to learn the only problem is there is nothing for the ground. There is no ground fighting taught in Muay Thai.

Muay Thai training would be great for self-defense. To become a complete fighter you would need to get training for ground fighting at a different gym.

Jeet Kune Do is a great martial art for self-defense. This was developed by Bruce Lee to really open up fighting to no form and no style.

Bruce Lee was basically envisioning what is known today as MMA fighting. You use whatever weapon and technique from any fighting style to win in a fight.

Training in just one style will mean you are weak in something that an attacker can take advantage of.

If you know Muay Thai and get into a fight with someone that knows BJJ and the fight goes to the ground you will lose.

The Muay Thai fighter does not know how to ground fight.

Jeet Kune Do training depends on the school you go to but most train in all aspects of fighting. They will train you in stand-up, weapons, and ground fighting.

I took Jeet Kune Do for three years and loved it. One great thing with weapons is our school taught Escrima stick fighting if you were advanced enough. I happened to have trained in stick fighting and really loved it.

Judo has some similarities to Brazilian Jiu-Jitsu. They both train intensively on ground fighting.

Judo allows you to position yourself to lift and throw an attacker or enemy onto their back. Once they are on the back you manipulate their body into positions where you can apply joint locks and chokeholds.

Judo is a great martial art to take to learn self-defense. Judo is also an Olympic sport so if you get good enough you may be able to get to the Olympics.

There are so many martial arts in the world but these are the top 6 that we think would best prepare you to defend yourself. The martial arts listed train your mind and body to repel attacks or take the offensive to stop anyone from trying to hurt you.

Many of these martial arts you can become really good at in 6 months to a few years. I have trained in almost all these so I know they are truly geared towards preparing you to defend yourself if need be.

If you are looking for more great articles check out how to end a street fight fast.