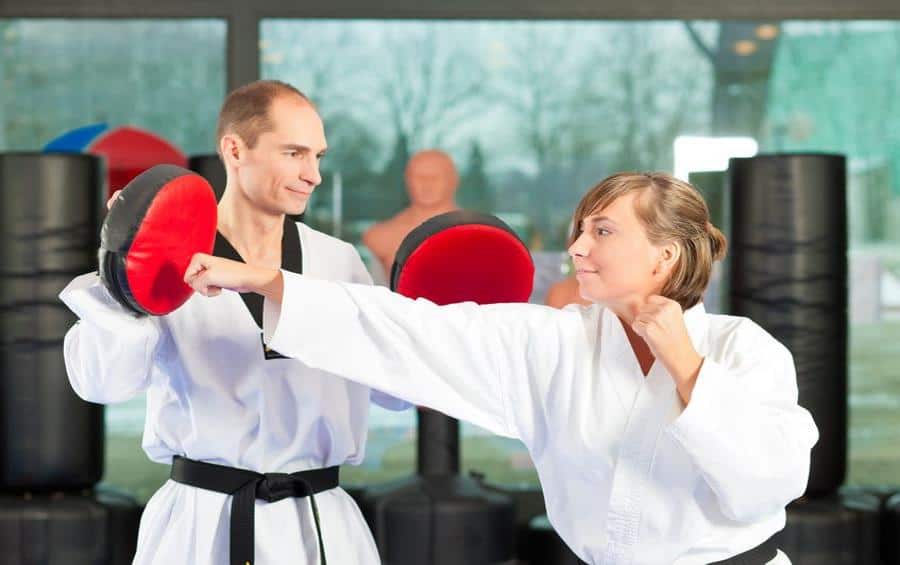 Many parents put their younger kids in martial arts to help with self-defense. It is a great way to start teaching someone to protect themselves.

However, for many, martial arts are more than just a hobby. It is a lifestyle and something that they are very passionate about and practices every day.

There are Tae Kwon Do practitioners who compete at the Olympics.

In the world, there are many different styles and forms of martial arts. People train hard to become the best in their martial art discipline.

Here are some different types of martial arts, and we will look at which one is the most popular.

This is the most typical form of martial arts practiced in the US. Karate mostly focuses on punching, kicking, and strikes using a knee and elbow. There are many different forms of karate.

Martial arts movies in the 1960s and 1970s caused many people to want to learn this martial art.

This is when many karate schools began teaching. I know that even in small towns, you can find at least one or two karate centers teaching lessons. It became popular quickly.

Many times, in movies, karate or boxing are portrayed as the main types of martial arts.

A perfect example would be the “Karate Kid” which came out in 1984 in the United States featuring a teen boy learning karate and life lessons from an older mentor.

Karate originated in Japan and was also the influence of the martial art Kung Fu which was created in China. It was created centuries ago and is definitely one of the top 5 most popular martial arts, but not number one.

If you decide to take karate you will see that students wear a uniform called a GI and have a belt to signify rank.

Like I mentioned earlier, Kung Fu was influenced by karate. This is another form of martial arts that is popular across the world.

Kung Fu was originated in China and refers to Chinese martial arts. Once again, there are also many different forms of this type of martial arts.

There are many modern referenced made to this martial art.  A good example would be the movie “Kung Fu Panda”.

Kung Fu even had a large influence on the origination of hip-hop dancing.

It’s crazy how the popularity of this martial art and its prevalence in movies and literature led to it actually affecting the development of a new dance style.

Judo is a modern martial art that ended up being an Olympic sport. It is super competitive, and the main objective is to take the other person down to the ground. It can be very dangerous.

This specific type became the model for other Japanese martial arts as well. Even though this has become widely popular in Japan.

This martial art is featured in movies such as “ John Wick”, “Flashpoint”, and “ Throw Down”.

Martial arts have been promoted through movies, shows, or books, it honestly has a huge effect on the percentage of people who are interested in it at the time.

Here is yet another widely popular martial art. Muay Thai originated in Thailand and is also called “ Thai Boxing”. This is a combat sport.

This became more popular in the twentieth century when Thailand began also competing in kickboxing. It came about during war in the eighteen hundred because a version of it was actually used in combat.

This is becoming more commonly practiced and Muay Thai is great to learn for self-defense.

Muay Thai is featured in many films in Asia.

You can use punching, elbowing, kicking, kneeing, and takedowns.

In all of these examples of popular martial arts, there is a lot of time and conditioning that goes into being good at the sport.

People spend their whole lives perfecting this art and even compete in the Muay Thai rings or K1 fights.

Brazilian Jiu-jitsu was originated in Brazil and is a combat sport that specializes in ground fighting. This came about after experimenting and implementing different techniques based on Judo.

The basic goal of this martial art was to prove that if you know enough about Jiu-jitsu and practice it hard enough, a smaller weaker person could defend themselves using the moves they learned.

One of the founders of the UFC (Ultimate Fighting Championship) was Gracie who created Brazilian Jiu-Jitsu.

There are so many connections between all of the different forms of martial arts. It is easy to know many things about several different kinds because of the similarities.

This is one of the best fighting systems for self-defense.

Taekwondo is a Korean martial art that focuses on fast pace techniques like jumping, spinning, and kicking. It was created in the mid-nineties based on Chinese martial arts. When practicing Taekwondo at a dojo you must wear a uniform called a Gi.

As you may have noticed many new martial arts are created from other older forms; basically, modernizing them. This martial art helped the Koreans get through the cold war. This really gave Korea a theory of power.

There are so many different styles and techniques that have several different names.

They all play an important role in the overall meaning and point of Tae Kwon Do.

It is popular here in the US, but, overall, it is more widely and commonly practiced than any of the other martial art in the world. There is an entire movie called “ Spin Kick” dedicated to this martial art.

Taekwondo is another martial art that became so popular and competitive that it is now an Olympic sport. It is one of the most systematic forms and I think that is why it sparks so much interest in the people who practice it.

Tae Kwon Do is very technically difficult and almost scientific. The martial art is very dynamic and requires incredible foot skills and flexibility.

To the people who practice it, it is way more than a hobby, it is a way of life, to them, it is similar to a job or family. That is how much it means to them.

Overall, I think it is important to realize how similar many of these forms are and that many of them were based on each other. Martial Arts can be classified as many things, but these are some of the most common, popular, and interesting.

If you are interested in practicing one of these, I highly recommend researching them first so that you know what you are getting yourself into.

I hope that now you have a better idea of some forms of martial arts and realize why some are more popular than others and where they all originated. You can also learn more about choosing the right martial art by reading choosing a martial art based on body type.